What Is An Annotated Bibliography?

What is an annotated bibliography?

An annotated bibliography is a list of citations (references) to books, articles, and documents followed by a brief summary, analysis or evaluation, usually between 100-300 words, of the sources that are cited in the paper.  This summary provides a description of the contents of the source and may also include evaluative comments, such as the relevance, accuracy and quality of the source.  These summaries are known as annotations.

Abstracts are the descriptive summaries of article contents found at the beginning of scholarly journal articles that are written by the article author(s) or editor. Their purpose is to inform a reader about the topic, methodology, results and conclusion of the research of the article's author(s).  The summaries are provided so that a researcher can determine whether or not the article may have information of interest to them.  Abstracts do not serve an evaluative purpose.

Annotations found in bibliographies are evaluations of sources cited in a paper.  They describe a work, but also critique the source by examining the author’s point of view, the strengths and weakness of the research or article hypothesis or how well the author presented their research or findings.

How to write an annotated bibliography

The creation of an annotated bibliography is a three-step process. It starts with finding and evaluating sources for your paper. Next is choosing the type or category of annotation, then writing the annotation for each different source. The final step is to choose a citation style for the bibliography.

Annotations come in different types, the one to use depends on the instructor’s assignment.  Annotations can be descriptive, a summary, or an  evaluation or a combination of descriptive and evaluation.

There are two kinds of descriptive or summarizing annotations, informative or indicative, depending on what is most important for a reader to learn about a source.  Descriptive/summarizing annotations provide a brief overview or summary of the source. This can include a description of the contents and a statement of the main argument or position of the article as well as a summary of the main points.  It may also describe why the source would be useful for the paper’s topic or question.

Indicative annotations provide a quick overview of the source, the kinds of questions/topics/issues or main points that are addressed by the source, but do not include information from the argument or position itself.

Evaluative annotations go beyond just summarizing the source and listing out it’s key points, but also analyzes the content. It looks at the strengths and weaknesses of the article’s argument, the reliability of the presented information as well as any biases of the author. It talks about how the source may be useful to a particular field of study or the person’s research project.

Annotations typically follow three specific formats depending on how long they are.

An annotation may include the following information:

In order to write an annotation for a paper source, you need to first read and then critically analyze it:

Worksheet for Taking Notes for Critical Analysis of Sources/Articles

How do I format my annotated bibliography?

An annotated bibliography entry consists of two components: the Citation and the Annotation.

The citation should be formatted in the bibliographic style that your instructor has requested for the paper. Some common citation styles include APA, MLA, and Chicago. For more information on citation styles, see Writing Guides, Style Manuals and the Publication Process in the Biological & Health Sciences.

Look for the "cite" link -- see examples for the following resources: 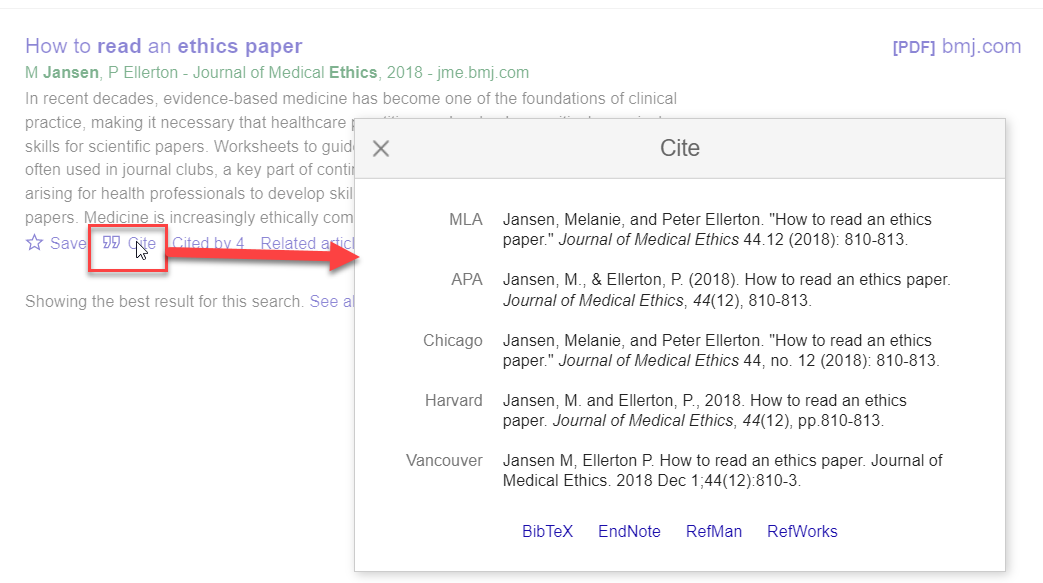 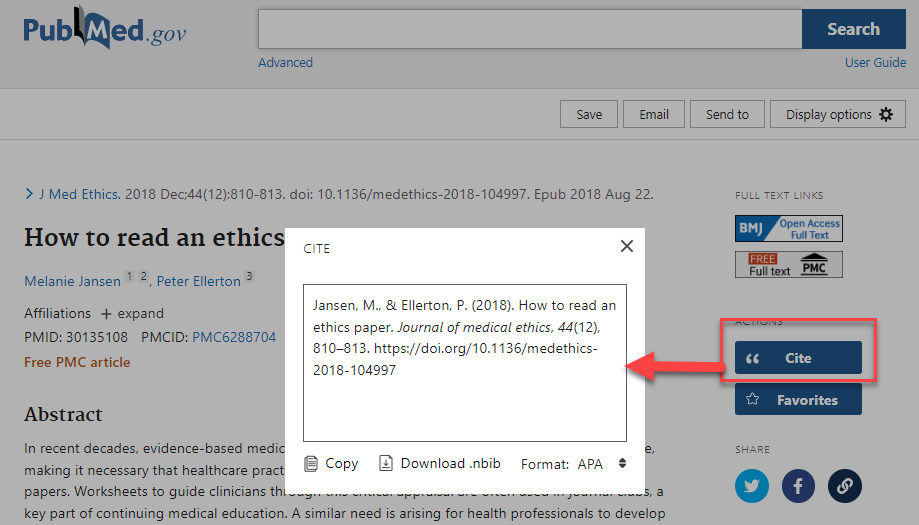 APA does not have specific formatting rules for annotations, just for the citation and bibliography.

This article focuses on the role of social capital in responsible leadership. It looks at both the social networks that a leader builds within an organization, and the links that a leader creates with external stakeholders. Maak’s main aim with this article seems to be to persuade people of the importance of continued research into the abilities that a leader requires and how they can be acquired. The focus on the world of multinational business means that for readers outside this world many of the conclusions seem rather obvious (be part of the solution not part of the problem). In spite of this, the article provides useful background information on the topic of responsible leadership and definitions of social capital which are relevant to an analysis of a public servant.

Herbert London, the Dean of Journalism at New York University and author of several books and articles, explains how television contradicts five commonly believed ideas. He uses specific examples of events seen on television, such as the assassination of John Kennedy, to illustrate his points. His examples have been selected to contradict such truisms as: “seeing is believing”; “a picture is worth a thousand words”; and “satisfaction is its own reward.” London uses logical arguments to support his ideas which are his personal opinion. He does not refer to any previous works on the topic. London’s style and vocabulary would make the article of interest to any reader. The article clearly illustrates London’s points, but does not explore their implications leaving the reader with many unanswered questions.

University Libraries Tutorial -- Tutorial: What are citations? Completing this tutorial you will:

Resources from Other Libraries

Citations are brief notations in the body of a research paper that point to a source in the bibliography or references cited section.

If your paper quotes, paraphrases, summarizes the work of someone else, you need to use citations.

Citation style guides such as APA, Chicago and MLA provide detailed instructions on how citations and bibliographies should be formatted.

Parts of a citation

Dunn WG, Walters MR. A randomized crossover trial of the acute effects of a deep-fried mars bar or porrridge on the cerebral vasculature. Scott Med J. 2014;59(4):182-187.

Resources, tips, and guidelines to help you through the research process.

Search Strategy Checklist and Tips
Helpful tips on how to develop a literature search strategy.

Boolean Operators: A Cheat Sheet
Boolean logic (named after mathematician George Boole) is a system of logic to designed to yield optimal search results. The Boolean operators, AND, OR, and NOT, help you construct a logical search. Boolean operators act on sets -- groups of records containing a particular word or concept.

Health Statistics and Data Sources
Health related statistics and data sources are increasingly available on the Internet. They can be found already neatly packaged, or as raw data sets. The most reliable data comes from governmental sources or health-care professional organizations.

Scholarly vs Popular Journals/Magazines
How to determine what are scholarly journals vs trade or popular magazines.

Identifying Peer-Reviewed Journals
A “peer-reviewed” or “refereed” journal is one in which the articles it contains have been examined by people with credentials in the article’s field of study before it is published.

Evaluating Web  Resources
When searching for information on the Internet, it is important to be aware of the quality of the information being presented to you. Keep in mind that anyone can host a web site. To be sure that the information you are looking at is credible and of value.

Citing Sources
Citations are brief notations in the body of a research paper that point to a source in the bibliography or references cited section.

Structure of a Research Paper
Reports of research studies usually follow the IMRAD format. IMRAD (Introduction, Methods, Results, [and] Discussion) is a mnemonic for the major components of a scientific paper. These elements are included in the overall structure of a research paper.

Top Reasons for Non-Acceptance of Scientific Articles
Avoid these mistakes when preparing an article for publication.

Writing guides, Style Manuals and the Publication Process in the Biological and Health Sciences
Style manuals, citation guides as well as information on public access policies, copyright and plagiarism.